The district has exotic cultures with 14 ethnic minorities and historic sites like Bac Ha temple and Hoang A Tuong palace.

A rural district of Lao Cai province, it is famous for the Sunday morning market of the Flower Hmong people, call Bac Ha market, where thousands of locals and tourists met up. 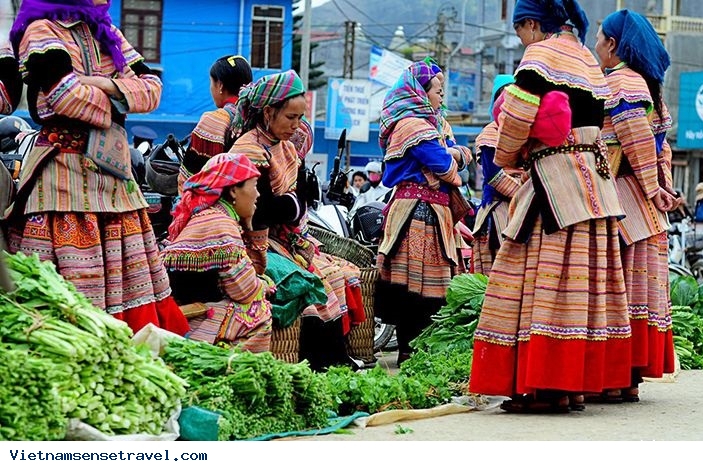 Locals bring anything they have to sell at the market. Some just go to there for a cup of wine, meeting friends and showing off their best costumes.

Ha Thi Van, a Tay resident from Na Lo village in Ta Chai commune, said tourists who stayed in her home can learn about the Tay culture.

“They can also try growing rice, picking plums or cooking with my family,” she said.

Villages like Ta Chai are attractive for visitors not only for the picturesque landscape, rustic houses, but also local specialities such as corn and Tam Hoa plums.

Virginia Poret, a French tourist, described the Can Cau market, which is often held on the morning of Saturday, as an event full of colors, mentioning the colors of traditional costumes wore by local women.

In recent years, Thai Giang Pho commune has become a hotspot in the country’s tourism map.

The once withered fields are now a stunning flower valley, luring visitors to the locality.

Bac Ha district welcomed more than 300,000 tourists in 2017. Of the total, foreign visitors accounted for more than 25 percent.

Lao Cai province raked in nearly 8.4 million USD from tourism in the year.